Boiling peanuts out of the shells? 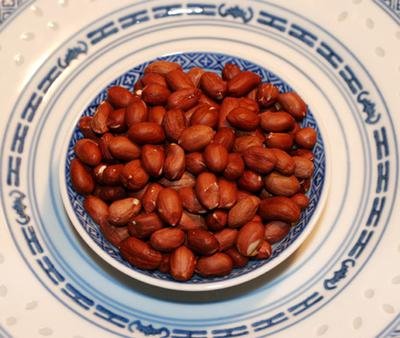 In the UK I've never seen green peanuts on sale and it is also difficult to source raw dried peanuts in the shells. They nearly always come roasted and are called "monkey nuts" over here for some reason. I guess monkeys must like them!

Raw dried peanuts out of the shells are however readily available and work out cheaper to buy, peanut for peanut, than the shelled ones. I don't like to eat them raw though, they give me indigestion. I normally roast them in a fan oven at home as a single layer of nuts in a metal tray (takes 25 minutes at 300F) for eating as a snack or sometimes make them into peanut butter in my food processor.

Has anyone tried boiling peanuts out of the shells? After all, you can boil all sorts of dried peas and beans without keeping them in the pods, such as split yellow and green peas, chick peas/garbanzo beans, soy beans.

I know it is traditional to boil and serve them in the shells but I can't seem to find any information on using unshelled peanuts instead. They would be a lot less fiddly to serve!